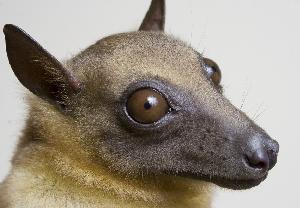 I've been meaning to post about this paper for a while now and thought that nearing the end of the year would be a good time to clear my head of thoughts about it.


The paper I'm talking about is one that was published recently in the Journal of Virology (http://www.ncbi.nlm.nih.gov/pubmed/23152534), and concerns itself on the discovery, characterisation and epidemiological investigations of two bat viruses. It was carried out by a large team from the UK and around the world. The first author was Kate Baker.

These viruses, which they isolated themselves (yes! actually, physically have virus to study) were found in the urine of fruit bats (species: Eidolon hevlum, the straw coloured fruit bat - a truly magnificent animal). There's good evidence that these viruses are natural 'pathogens' of bats and there is limited evidence to suggest that there has been human exposure to them in the past. The importance of this is limited but personally I would prefer to know what is out there before it emerges.

For another take on this paper check out Andrew Shaw's Virus Musings blog: http://www.virusmusings.blogspot.co.uk/2012/11/when-is-zoonosis-not-zoonosis.html.

They called them Achimota virus 1 and Achimota virus 2 (because of where they were found). And they're two pretty distinct viruses, based on their entire genome sequence. But generally they can be considered to belong to the genus of viruses termed the rubulaviruses. Until that classification is updated, as considering the recent virus discovery missions have increased the diversity present in the family. Judging by the phylogenetic trees for all members it looks like we have got two rough groupings: classical rubulaviruses and the rubulavirus-like viruses (in my opinion), of which these two Achimota ones are found. So even though these viruses are rubulavirus per se (and this is worrying/interesting because the rubulaviruses contain five human pathogens, including mumps and a number of parainfluenza viruses) they belong to a distinct grouping that so far contains no human pathogens. Whether this is important it is not known. ( do the classical rubulaviruses differ to these others in a way that predisposes them to human infections?). I'm not going to be surprised if this virus family gets an overhaul in the next ten years!

But that gets us to the second aspect of this paper. Not only did they isolate and characterise these viruses they did epidemiological work too. Although NOTE, they characterised them following tissue culture growth and hence potential adaptation to primate cell lines without interferon responses (veros) cannot be discounted. Their virus isolation protocol may predispose to this kind of genetic 'screw up', especially when viruses are highly purified, genetic drift can creep in. And for any downstream experimental work this should be taken into account.

However, with sequence data in their hands they could go back into bat urine samples and sequence the virus, without passaging in tissue culture directly from 'clinical' material to determine whether any amount of tissue culture adaptation occurred. Luckily there are ways to mitigate this through the generation of a cDNA clone of the unpassaged sequence. From this we could regenerate un adapated virus in the lab.

Should we be worried?

This paper should be compared to the recent Drexler et al 2012 paper that documented the discovery of lots and lots of viral sequences from bat species (and rodent species) across the world. One of which is a mumps-like virus that IS in the 'classical' rubulaviruses and looks extremely like mumps, at least on an amino acid sequence level.

But we shouldn't be too casual about these viruses as at least for the mumps-like one, antibody serum from mumps -exposed people effectively neutralizes bat mumps. It is unlikely that (in fact it doesn't) mumps serum neutralizes these. That means that potentially there is little protecting us from this virus in terms of adaptive immunity. Which may not matter much considering there may be many other hurdles in the way of the virus.

They were able to find some humans ( 3 out of 442 - very low - I am not an expert on this and am not sure whether this is 'signal' or 'noise') from the local area whose serum did neutralize Achimota virus 1 infection but not that of Achimota virus 2. One of these three was from a feverish child, however teh liklihood of this virus being responsible for the fever is low. Whether these antibody data are indicative of real infection or whether it is exposure to viral antigens we cannot say.Seroconversion is not indicative of a productive infection, however!

I think it would have been better to sample local domestic animals for the virus than humans.

As with all these bat viruses it would be good to know how if anything are they different to related human infections. And from that, what is the likelihood that they will 'spill over'. To do this we need to understand the human viruses in terms of receptor usage and target cell tropism, for example. Whether these viruses need to adapt or not to human or any other animal species should be determined experimentally. Whether this adaptation needs to take place on a receptor binding phenotype, an immune evasion one or through exit from the body needs to be addressed. For this we need experiment but to do so we have to be confident that we are working on 'real' viruses. And this paper makes me worry that what they have may not be as real as it could be. But that's to be seen. I am only being picky.
Unknown on Friday, December 21, 2012
Share