Single mumps vaccine jab (versus MMR) in the UK - back again?

The "Children's Immunisation Centre" has recently announced that it plans to start administering the single mumps vaccine sometime in the 2nd quarter of this year in the UK. When I rang them up asked at the helpdesk, the very helpful receptionist told me they were scheduling vaccinations for July. Their website details: 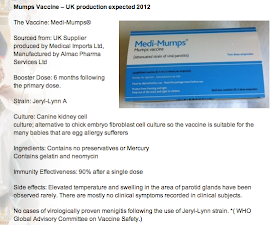 "Currently Mumps single vaccine is not available due to Merck stopping the manufacture of it about 3 years ago. However we are working with our suppliers (who have an MHRA -Medicines and  Healthcare products Regulatory Agency - Wholesale license and who are regularly inspected) to source a Jeryl Lynn Strain (the safest strain) of Mumps vaccine."


"M-M-R single vaccines are manufactured by, France, India, and in some European countries and also China, Russia and in future the  UK. Our suppliers in the UK are working with UK manufacturers and are looking to produce the single mumps vaccine  for our patients."

The internet has picked up on this as well, here.


This group of private clinics which are found across England, has been supplying the unlicensed single vaccine alternatives to the MMR jab (of which we have two, MMR-II and Priorix) for nearly 10 years now. However, when in 2010 due to lack of demand Merck pulled the plug on it's production of Mumpsvax (it's single mumps vaccine alternative in the UK based on the safest strain: Jeryl-Lynn), the Children's Immunisation Centre and other like-minded institutions were forced to stop vaccination against mumps entirely. They continue to administer single measles and rubella vaccines though leaving many children without protection against the mumps virus. This lack of immunity has contributed to recent outbreaks of the virus across North America and Europe.


This centre who has been feeding off the unwarranted fears of concerned parents has done nothing to educate their customers to the overwhelming safety record of the MMR vaccine, despite citing measles outbreaks in their news section. They don't mention this health & safety record but instead point all interested parties to articles in the Daily Mail.


They instead have been happy to take their money. And for about £95 a pop (£100 for mumps) on top of a £50 registration/prescription fee, I am sure they're making a killing. I must add that the MMR is entirely free to the public on the NHS. No wonder they have been itching to get back into the mumps market.


You might think that given the potential seriousness of some of these infectons (mumps can cause painful swelling of the salivary glands and testis as well as meningitis and even deafness) and the sheer numbers involved when outbreaks occur, you may be inclined to forgive such an enterprise who are clearly so involved in protecting the UK's children. But all single vaccines are in themselves unsafe, even if they display such an incredible safety record in terms of side effects. This is down to the length in time between each individual vaccine and their boosters. This causes an increase in the number of unprotected children in any given population. These non-immune kids could easily catch the viruses and seed an outbreak.


Now the UK has been here before. I think twice have we seen places like this attempt to bring in new vaccines to the UK market and twice they were blocked by the Medicines and Healthcare products Regulatory Agency. In 2002, groups tried to bring in a Czech Republic-manufactured (by Sevapharma) mumps vaccine known as Pavivac. This vaccine was inevitably turned down and use suspended due to concerns about it's effectiveness and safety. With clear annoyance from the Czech company. This happened once again except with a strain known as Urabe. This vaccine proved to unsafe and caused a number of cases of meningitis in those vaccinated.


What groups like the Children's Immunisation Centre are doing in sourcing their vaccines is entirely legal, albeit a bit ethically dubious:

"In accordance with medicines legislation, unlicensed medicines may be
imported into the UK by licensed importers following notification to MCA [Also known as the MHRA]. Such
unlicensed medicines may only be imported to meet the special needs of individual
patients which an equivalent licensed product cannot meet. As such unlicensed single
Jeryl Lynn mumps vaccines have been imported by licensed importers following
notification to MCA."

The catch is, is that you will have to prove that your vaccines are safe and that they work well.


We can look at their vaccine in a bit more detail and see that "Medi-Mumps" is "Sourced from: UK Supplier produced by Medical Imports Ltd, Manufactured by Almac Pharma Services Ltd". Almac is company based in Northern Ireland as it turns out.


We can see that their vaccine is based on the live-attenuated Jeryl-Lynn strain but that it is grown on dog kidney cells as their website says. This virus (as far as I can tell from these scant details) looks a lot like the Pavivac vaccine that was previously turned down. The major sticking point was the issue of growth on dog kidney cells:

Pavivac - "The mumps constituent of vaccine is prepared by the propagation of further attenuated Jeryl Lynn strain of the virus of mumps in the primary cultures of dog kidney cells in synthetic medium H-199."

So at least superficially the virus looks to be quite similair.


So when I got in contact with Almac Pharma Services Ltd, the quality care guy there assured me that they nor Medical Imports Ltd. were not in fact manufacturing it but only importing and packaging it for the UK market; it was being made in a facility in the Czech Republic. He noted that it's importation was being held up by some regulatory issues to do with the way the vaccine was produced.


It's now starting to look very similiar to that Pavivac vaccine.


So now we have a situation that is seems to a repeat of what happened a couple of years ago with Pavivac in the UK. But you might think again that at least these parents are vaccinating against mumps now. Maybe we won't have anymore outbreaks. But as I mentioned earlier, there have been concerns at how good this vaccine is at actually preventing mumps infection.


I can find no information on any potential adverse reactions to this vaccine but we should be able to assess it's immunogenicity by looking at the Czech Republic data, data that should tell us how many people have protective antibodies.


The Czech government have been vaccinating their children with the recommended two doses of the MMR job (containing this strain of mumps vaccine) since 1987. But in the last decade they have seen a number of really big outbreaks of mumps, at a severe cost to the country.

"The outbreak affected mainly two different groups of people: a highly vaccinated birth cohort (1986 – 2004), and a birth cohort with low vaccination coverage (1971 – 1985), at considerable cost to the country."

"The Czech Republic uses the live attenuated Jeryl Lynn strain of mumps virus for vaccination since the introduction of routine mumps vaccination. The strain is reported by the manufacturer to be highly safe and efficacious for vaccine use, and both more stable and immunogenic than alternative strain-based vaccines [1]. Though the reported data indicate high vaccine coverage achieved (97-100%), in a seroprevalence survey conducted in 2001, the prevalence of antibodies against mumps in age group 1-15 years (average 79%, range 70-86%) failed to correspond with declared mumps vaccination coverage rate of 97-100% [6]. The herd immunity induced is considered insufficient to prevent epidemics of mumps [7]."

The level of herd immunity needed to stave off a mumps outbreak is reported to be around 95%, so clearly this was waiting to happen here.

"Further studies are required to investigate risk factors for vaccine failure, such as whether the type of vaccine used (monovalent, bivalent or trivalent) affected the occurrence of the outbreak, or if there may have been failures in the cold-chain during vaccination. For the older vaccinated cohort (born 1986-1995) a plausible explanation would be the waning immunity or vaccine failure, as was demonstrated elsewhere [8,9]"

No work to date has been published looking into the real-world effectiveness of these Czech vaccines as we haven't been able to work out the vaccine efficacy here so we should refrain from jumping to conclusions based on these data, especially as these numbers look very similar to those mumps outbreaks happening in the likes of the US, UK and Europe where they are using Merck's or GSK Jeryl-Lynn-based MMR vaccines or indeed other non-JL vaccines.


So maybe what this highlights is the more general view that all our currently used mumps vaccines, despite helping us achieve near elimination of the disease, will not be able to allow us to reach the desired goal of 95% herd immunity. So in relation the Pavivac situation, when all our vaccines appear to be equal in their immunogenicity, why not just stick to the tried and tested MMR vaccine? No need to use the single ones which have not passed the UK's rigorous safety testing.


For more info on mumps and associated outbreaks, see a number of posts here.