Mumps outbreaks - why here, why now? and how can we stop it? 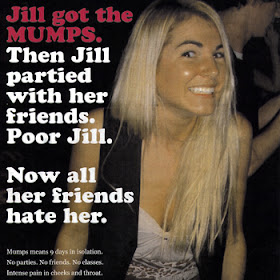 Mumps is an acute viral disease of humans and really only humans. It is spread through the respiratory tract (probably droplets and aerosols) where the virus most likely infects the cells lining the epithelium - we don't really know this for certain. From here it spreads throughout the body, infecting organs and tissues such as the salivary glands, testes and ovaries, pancreas, and perhaps most worryingly, your central nervous system. In fact, in the pre-vaccine era, mumps was the biggest cause of aseptic meningitis across the developed world; it can also cause the more severe encephalitis.

Lucky we've got a vaccine, right?

Over the last couple of months (and, in fact, the last couple of years), we have witnessed a number of outbreaks of mumps across the world, for example: September/October UC Berkeley had one, as has Cumbria. For ones before 2011, see: here, here and here. Although this says little about what is happening in countries were mumps is endemic, such as Japan and in parts of Africa/Middle East.

We thought we had put this all behind us.

But what's the most alarming thing about these, is that mumps is a vaccine preventable disease and since the 1960's most of these countries have been routinely immunizing their populations  against the virus (think MMR jabs). For the most of it, this vaccine has effectively reduced mumps attack rates by something the realm of 99%. So what's happening here then? Has something changed to cause this? Is our vaccine no longer working? Has the virus evolved to circumvent our defenses?

Well, theoretically there could be a number of hypotheses explaining why mumps continues to circulate and cause disease in these countries and following each outbreak, they are usually investigated.

I have summarized the main characteristics below, although each outbreak appears to be different:
So if we have identified the factors that have facilitated the recent mumps outbreaks, what can we do in the future to stop these? Well, one is to get vaccinated and preferably at least two doses, but what these outbreaks have shown is that even those who have received two MMR jabs may still get the disease and so contribute to large outbreaks, so maybe this is a call for a catch-up/booster program for at risk populations, like university students?

What can be said for certain is that if we do not review and change our vaccination programs we will continue to see outbreaks like these more and more. And, if we can't successfully control a 'easy' vaccine-preventable disease like mumps, how will we be able to control more difficult-to-handle pathogens, like HIV?