Your liver as a viral filter - who, what, where, why?

The liver is a pretty amazing organ (see structure above) - especially when you take into account its often unrecognised immunological role. It's becoming more established that we can kind of think of the liver as a giant biological filter where it extracts all sorts of harmful molecules and pathogens from our blood. After all, it is a major component of the reticuloendothelial system - your bodies natural filtering system. From the minute any microbe reaches your blood stream, it is instantly taken to the liver on the back of our circulatory system. And, within an hour, nearly 100% of those pathogens are removed (see graph below) but what is doing this inside your liver?
But, while this all sounds like a pretty good idea, removing those nasty viruses - when we move into the administration of viral gene therapy vectors, what we don't want is the liver to remove those helpful microbes. And it's becoming a pretty big research project, trying to engineer these vectors to evade our liver.

The system isn't perfect but how exactly does it work? - and if we understand how it works, can we subvert it? 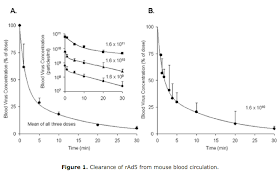 Surprisingly, despite known that the liver does this (since the dawn of the 20th Century), we've never really been sure how it does it. It was previously thought that it was a kind of white blood cell (macrophage to be precise) - called a kupffer cell - that was responsible for engulfing nasty pathogens. But, a paper - published this week in PLoS Pathogens shows that it is in fact the cells lining the walls of your liver blood vessels that do the dirty work; that is, for human viruses in mice.

The liver has long been known as the garbage dump of the body, capable of rapidly removing hazardous pathogens and useless particles from the blood stream, thereby protecting the host. The only cell doing the removal has been thought to be the liver's macrophages. This is likely true for larger particles such as bacteria. But for smaller particles the size of virus or small antibody-antigen complexes, macrophages are probably not the cell responsible for the bulk of removal. We suggest, rather, it is the endothelial cell of the liver's blood circulatory system that takes up and destroys the majority of virus, doing so quickly (minutes) and extensively (>90%), leaving only a small fraction of circulating virus to infect the body in ways peculiar to each virus. To test this possibility, we infused mice intravenously with a harmless common cold virus and tracked its destination by molecular and microscopy methods. Affirming our conjecture, we found that ~90% of the infused virus homed to the endothelium of the liver and ~10% went to its macrophages. These data support a unique role, generally underappreciated, for the liver endothelium in viral clearance.

There are also some videos of this process in the supplementary figures.
Using fluorescently labelled adenoviruses (a common cold virus used for gene therapy) and an array of liver cell-specific antibodies, the group looked to see if they could visualize the location of both the virus and liver cells of their infected mice. By injecting viral particles that can no longer replicate in mice, directly into the blood, they were able to rapidly detect the majority of the virus in the liver - and quantify the number of viruses interacting with each cell at 1 minute after administration. And, contrary to previous work, they saw that it was indeed the endothelial cells that bound most virus - and most likely removed it from circulation (although this was never actually looked at - they say it is probably degraded inside these cells).

Turns out these cells are particularly well suited for the their job in clearing up these miniscule pathogens:

LSEC [liver endothelial cell] are voracious scavengers, more numerous and voluminous than KC [Kuppfer macrophages]; they pinocytose rather than phagocytose, appropriate to taking up virus-sized particles; they contain abundant coated vesicles and lysosomes; and they display receptors for mannose, collagen, hyaluronan, IgG, and scavenger receptors but not complement receptors.

Basically this means that their are many more of the endothelial cells that macrophages, they are able to swallow lots and lots of little viruses (pinocytosis - cell 'drinking') and have in fact many molecules on their surface than can be used for grabbing on to sticky viral particles.

Despite focusing on a pretty unnatural model (injecting replication-deficient human respiratory viruses at high doses into lab mice) they say that this mechanism may likely be at play in humans under more natural conditions - especially when you consider that many viruses (measles, mumps, HIV, hepatatis viruses) are able to enter your circulation and spread throughout the body in their viremic phase. And, while this mechanism may work for viruses - the previously recognized macrophage phagocytosis most definitely works for the much larger bacterial cells.

This block in infection may explain why many viruses spread throughout your body on the backs of (or by infecting) your own white blood cells - see my older post here. These cells are present in every organ system (easily accessible), they move about the body (transportation of infection), will not be picked up by the liver (protection) and importantly - there are lots of them. Only time will tell whether we will be able to engineer our gene therapy vectors to get around this system.