Last Tuesday a man, flying into Glasgow, Scotland from Dubai, was admitted to the local hospital with a very rare disease in these parts - in fact it was the first reported clinical case of the disease here. It is known as Crimean-Congo Hemorrhagic Fever, or CCHF and it subsequently emerged that after being transported to a specialist centre in London he later died at the weekend, a horrible death probably characterised by rapid onset of fever, headaches, hemorrhage, intestinal damage and neurological symptoms.

This particular disease is caused by a virus that we know quite little about. The CCHF-virus (CCHFV) and we have nothing in our grasp to stop or prevent it but it is one that we our keeping a very, very close eye on.  Hence the big interest in the recent case in Glasgow. This virus can have a case-fatality rates of upwards of 30%, however the rate of subclinical infections is largely unknown but might be close to 90%.

CCHFV is a very geographically widespread virus found across two major continents and about 30 countries. Thankfully not yet in North-Western Europe and the UK but it is found across much of Eurasia (Eastern Europe, Asia and the Middle East) as well as Africa. It was first seen in the Crimean peninsula during the 1940's and later popped up in the Congo (hence it's name) but don't let that fool you, it's not as restricted as that might let you believe. There is evidence that its range is even increasing.

Now, CCHFV is one of those awkward viruses, it has a rather complicated lifestyle choice. It is zoonotic as in it comes from animals and is not like measles and mumps. In order to survive it has to infect both ticks (a kind of blood-eating invertebrate arachnid) and vertebrates, like domestic animals or even humans. But the major risk factor for us are tick bites. And to complicate matters even further, the young virus-laden tick particularly likes to live out its youth on the backs of smaller vertebrates like hedgehogs and only once it has matured can it jump to cattle, sheep and goats plus some species of birds (the kind of animals that we like to have around us. The virus is a two-host parasite and so is the tick. The virus can even spread from tick to tick during reproduction (sex and birth) and it can even move from vertebrate to vertebrate, given close contact with infected bodily fluids. It is this final property that makes public health workers so worried: it can really kick off around an ill-prepared hospital.


So to understand why CCHFV is where it is, you have to understand this cycle of infection and given that the same domestic animals are found throughout the world, the major controller of CCHFV presence are the ticks. It is a pretty old and genetically diverse virus which probably spread across its range with the expansion of agriculture from the Middle East across Asia and down in Sub-Sahaharan Africa.

One of the most favourite things of CCHFV are Hyaloma species of ticks, in particularly Hyaloma marginatum. These hard-bodied ticks live for about 3 months and as described above pack that short life full of multiple host changes. These ticks are also pretty widespread across the world but they really prefer dry and open habitats full of their small and large vertebrate hosts. Worryingly these species of tick have been found in areas of South Europe surrounding the mediterranean and has even been found as far north as the UK, carried there by migratory birds. Recently, CCHFV infected ticks were even detected in Spain found on deer.However in both these places, endemic or even epidemic outbreaks of the virus have not been observed. Perhaps the virus is not completing its full life cycle there or maybe infections do occur but are sub-clinical. A recent analysis suggested that the risk to more northerly European regions is low, citing cold springs that would prevent the ticks from surviving. But that doesn't stop Europe from worrying as two years they published a report mentioning that:

"....a rise in temperature and a decrease in rainfall in the Mediterranean region will result in a sharp increase in the suitable habitat areas for H. marginatum and its expansion towards the north, with the highest impact noted at the margins of its current geographic range"


That's right. One of the major issues with tick borne pathogens is the changing environment, whether it is climate change or agricultural growth. Here's a great review on the role of climate change on the distribution of ticks. One of their points regarding CCHFV is that very little is understood about how this virus interacts with ticks (we don't exactly know what species it infects or how) and their vertebrate hosts (what animals are infected in the wild). So to answer the question at the start: will UK ever see CCHFV again? I wouldnt be suprised if another imported case springs up from endemic regions but whether it will establish itself here is not so predictable. Certainly at the minute it cant: our weather is much too harsh for the tick. But what about in the future as climate change alters the environment in and around the Mediterannean? We're going to need more research into the virus to answer the above questions. CCHFV is an important global pathogen and an unmet medical need.

How would you like to adventure inside a tunnel that is 15 metres in length, 12 metres wide and in parts only 3.5 metres tall? Doesn't sound too bad. The catch is that this very popular tourist attraction - known as 'Python Cave' in Queen Elizabeth National Park in Uganda - is crammed full of 40,000 Egyptian fruit bats, African rock pythons (who actually feed on those bats) and a couple of forest cobras. It's also incredibly dark and piled with bat poo but most importantly it's known to harbour one scary virus: Marburg virus. 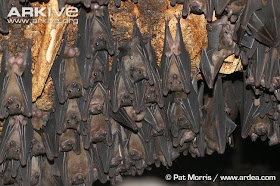 This cave has already lead to the death of one Dutch tourist and the infection of one from the US sparking major scientific interest in it. This story is nicely written up in the recent book: Spillover by David Quammen. But up until a couple of years ago we didn't know how these people got the virus and that's why the Centers for Disease Control, alongside teams from South Africa and Uganda itself have made it their mission to uncover the secrets of Python Cave and specifically, why did those tourists get infected at that particular place and time? If we know that, maybe we can rationally defend ourselves against getting infected. Well,  a recent paper appears to answer that question.

Publishing in PLoS Pathogens today, the CDC lead team report a detailed ecological investigation into Python Cave and especially the Fruit bats that roost there. In 2009 the same team documented their initial study of a nearby cave associated with an outbreak of marburg virus in miners working there. They found that the Egyptian Fruit bats roosting inside harboured a very diverse mixture of marburg viruses, indicating that they were the natural source of the infections. For an excellent set of pictures of the bats, including a nice shot of a bat and a python, see here: http://www.flickr.com/photos/simian_fan/sets/72157594342657070/.


So when the next outbreaks happened they repeated the analaysis in that cave to see if the same bats were the source again, involving the capture and analysis of over 1,500 individual bats. But this time they were able to assess how virus infection in the bats differed over their lifetime and from season to season and through this they were able to identify some alarming patterns. They wanted to know precisely whether these bats still contained marburg, how did they transmit the infection to each other and to humans and how did the virus persist among the population?

Using sensitive PCR analysis combined with antibody testing and virus isolation, just less than one fifth of all their bats sampled showed some evidence of current or past infection with marburg virus. And these viruses were pretty similiar to those found in the nearby mine - even one of the bats had been tracked all the way from the mine indicating long range transport of infection. Inside each of the bats they were able to find evidence of the virus in numerous organs, like the lungs, kidney, blood, colon and even their reproductive tract indicating that infection could be transmitted via multiple routes: poo, urine, biting and scratches, through birth and even via ticks and other biting insects.

But one of the most interesting findings was this: bats of around 6 months of age were the major carriers of the virus. Adults only showed a relatively low and constant level of infection, while very young pups had low levels indicating that virus infection peaks at a particular age level and then the incidence shoots back down. Clearly something is controlling this pattern of infection but what that is is unknown. Yet when they alligned their virus detection data with historical numbers on when humans had been infected with marburg in the past, they showed that the peak in risk of symptomatic infection correlates with the bat birthing season, the time when pups born in the last season reach 6 months of age. They predict that every year a total of 20,000 pups are born. That is a lot of virus infected baby bats. We've even seen this pattern before.

So what the hell is the take home message here? Ok so we know bat populations all around the world contain masses of viruses and in the future we're only going to find a heck of a lot more. And in many cases these viruses have jumped species and killed lots of people and nearby animals and the rate of this may even be increasing. And probably many of our common pathogens nowadays, like mumps and maybe even the common cold originally came from bats. So in the future we would like to stop it happening - lots of lives and money could be saved.

But it's probably very hard and ethically wrong to a) kill all the bats, b) vaccinate against every bat-borne potential virus and c) do nothing. So what many people have called for is a more general, ecological answer to address the whole swathe of potential emerging pathogens and this paper begins to lay down concrete data that provides one mechanism to prevent virus emergence: don't go anywhere near bat roosts during birthing season if you can help it. Of course these answers will probably also lie in the spheres of cultural and economic changes in behaviour as well. So remember that this study of marburg in Africa is but one peice of a very large and complicated ecological problem.