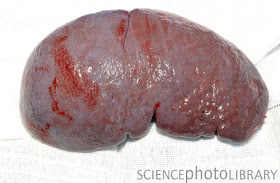 What's that big brown bag - packed full of red blood cells - for in the upper left of your chest? Sure you can live without it but why's it there in the first place and what's it doing for you? You wouldn't just be carrying round that extra 175g (for an 'average' person) just for nothing would you? While it has been known that loss of your spleen, or asplenia has some pretty strange effects, such as an increase in some blood cells, lessened response to vaccinations and an increased risk of serious infections, we haven't exactly known why. That is until now, when a German team - publishing in Nature Immunology a few weeks back - uncovered an unrecognised role for a certain kind of immune cell that specifically hides out in your spleen.

Actually a number of years ago you might have heard something very like this story when researchers found that the spleen could aid in the regeneration of damaged tissue but this is something different. This is the second time that the spleen's function has been revolutionised.

You are continuously being bombarded by potentially dangerous molecules, microbes and other organisms who would really like to use you to further their own evolutionary lineage. This is why a system to specifically recognise these organisms and physically remove them and protect you from future attacks has been selected for over millennia. This is one of the reasons why you have a spleen.

In the media aftermath of the H5N1 transmission debate we've been hearing an awful lot about the possibilities of bringing synthetic biology to the field of virology. In fact, one of the best analyses of this situation is Carl Zimmer's piece in the New York Times. In it, Carl explores the capabilities of DIY, amateur biologists to investigate how viruses infect and cause disease. The pro's and con's of utilizing synthetic DNA to make viruses versus the more traditional methods are looked at briefly but really how easily can it be done? and how different is this new wave of synthetic virology versus earlier methods?