Why should we support WHO Immunisation week? 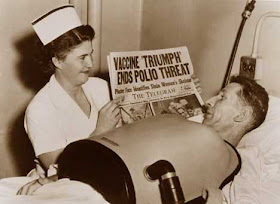 As many of us in more developed regions of the world rarely come across such things (although it is hard to forget the continuing presence of measles, mumps and influenza across North America and Europe), you may not consider many of these diseases important, yet imagine the effect these pathogens have across the developing world. Think of the young lives lost to these common respiratory pathogens and think of what effect chronic illnesses such as paralytic polio and hepatitis have on not just individuals but communities and families. And, what  must also be remembered is the reason why, we in the developed world, may not come across these terrible diseases - the reason is vaccination. Moreover, the continuing force of rapid and easy global air travel requires us to develop a truly global immunisation effort to prevent the transmission of these pathogens.
This week marks the World Health Organisation's (WHO) Immunisation week which has been set up to focus attention on the continuing importance of protecting our children from common yet serious vaccine-preventable diseases. With 180 countries and territories participating worldwide and specifically holding their own weeks in support of this, teams will aim to extend vaccination coverage and support into areas not easily accessible to immunisation campaigns and importantly begin mass-coverage schemes for the likes of measles and polio. But, what is really important here is that this is not just about vaccination, it is about increasing child survival in a broader sense in already under-developed regions and to this effect, vitamin supplements and other medicines are also being distributed.
WHO immunisation week sets out to:

Immunization week is led by WHO to:

The upkeep of global immunisation requires that the worldwide human population is continuously protected via vaccination, remembering that many of those diseases mentioned above still cause significant illness and deaths in across the developed world. Amazingly, it is not as if we need to develop new vaccines to protect from these diseases; we have them already. Vaccination has proved to be a safe and cost-effective means at reducing the effects of these diseases on the global population so support WHO immunisation week and help raise awareness of just how essential a global strategy to vaccination is.
Unknown on Thursday, April 28, 2011 No comments:
Share

Can we prevent gorilla extinction with vaccination?

Gorillas, Gorilla spp. are found only throughout central African rainforest where there are in total over 200,000 individuals living in the wild. Two gorilla species are recognised, split between east and west Africa with at least two sub-species recognized in both. Their numbers are rapidly decreasing with problems such as habitat loss, poaching and human war contributing  greatly to a rapid reduction in their numbers. Sadly, one other factor on top of these in which these large primates must worry about is that of the transfer of infectious agents arising from humans and other animals.
Viruses are constantly being transferred between populations of animals but may not establish infection all that easily in a non-host species. Although occasionally infection will result in virus replication and significant disease and this is known as a zoonotic infection -  when non-human viruses are transmitted to humans (see HIV, Influenza A and SARS-coronaviruses) and 'reverse zoonosis' when human viruses infect other animals. This pathogen transfer may be especially important when occurring in a critically endangered species such as gorillas; one recent example is that of human metapneumovirus.
﻿
﻿

We have been able to detect the effect of a number of viruses on gorilla populations including enteroviruses, adenoviruses and parvoviruses for example, although a small number are known to cause disease. In the last decade thousands of gorillas, chimpanzees and other mammals were killed through infection with the Zaire strain of ebola virus (EBOV) in the rainforests throughout the Congo basin area of central Africa. EBOV is a highly infectious and deadly RNA filovirus which causes a nearly always fatal hemorrhagic fever. The reservoir species for EBOV has been linked to central African fruit bat populations and ebola has caused hundreds of human deaths since its first recorded emergence in the 1970s.  Significantly more non-human primates have been victim to ebola than humans. We can implement a number of control measures for example limiting human-ape contact especially when ill to prevent this virus transfer but this may be more difficult when humans are not involved as in the case of EBOV. There are also a number of therapeutic options available although in the case of ape infection, would be logistically impossible. One strategy we therefore must consider is that of potentially protecting these Gorilla populations through vaccination against a number of potential viral pathogens.
﻿﻿
The group VaccinApe is attempting to do just that. A volunteer consortium lead by the charity group the World Wildlife Fund, a vaccine developer Integrated Biotherapuetics and two academic institutions, the Max Plank institute for Evolutionary Anthropology and Kansas state University, VaccinApe is trying to develop an easy and effective method of vaccinating Gorilla populations in the wild. Currently in a 'proof of concept' phase, the group will lead the development of non-human primate vaccinology in order to generate a safe and reliable Ebola virus vaccine to be used through darting of individual gorillas. A large scale vaccination program may therefore afford protection of critically endangered gorilla populations against future EBOV emergences.
In light of the clinical severity of EBOV infection in humans a number of potential vaccine candidates have been developed which rely upon the generation of a protective immune response specifically to EBOV. One main candidate the group are interested in is the EBOV virus-like particles (VLPs). These are effectively non-infectious viruses lacking a viral genome but retaining virus antigenic proteins. Therefore EBOV-specific immunity will be generated against whatever EBOV proteins are found within the VLP. In early trials in macaques, this VLP strategy protected individuals against EBOV challenge although whether this could safely be transferred to gorillas isn't known.

Endangered wild gorilla and chimpanzee populations are at a great risk from a number of emerging viruses with the most important being EBOV. The difficulties in preventing direct transmission/therapeutic intervention have led people to consider the development of anti-EBOV vaccines. A number of candidates have already been tested and proved safe and effective in non-human primate models possibly allowing these vaccines to be transferred to gorilla population testing. It is hardly surprising that the work required to carry out such large-scale and difficult vaccination campaigns in wild gorillas in the African rain forest will be extremely difficult. The main problems include safety/efficacy testing in gorillas, physical vaccination methods and tracking anti-EBOV immunity non-invasively. Despite these difficulties, only time will tell whether the work of VaccinApe and their partners is to be supported as a worthwhile investment to save these animals.

Viruses are the most common organisms on this planet and also most likely the most diverse. It is therefore unsurprising how ecologically important they are in particular environments and indeed global ecological processes. Just look at the amount of papers published on the subject recently. What is preventing us from extending these studies to more environments and preventing us having a closer look at what viruses are present is our inability to study small amounts of these microorganisms. Our knowledge of global viral diversity has most likely been biased by this lack of single-virus investigations.

In order for us to study viruses at the molecular level we have to somehow get the virus. This usually requires infecting certain cells with the virus in order to take advantage of virus replication and produce more and more copies of viral particles. This means that we have to find cells that the virus infects, which is difficult for some viruses found in environmental samples where no knowledge of host is available. This problem has been encountered with bacterial species where it was found that we were only able to grow in the lab a small percent of the total microbes from a single sample. The field of bacterial 'metagenomics' (get your free pdf review here) took off when it became easier and easier to study the molecular biology of those bacteria without the need to grow them in the lab; we are now able to fully sequence bacterial genomes without the need for culturing. These developments are now being applied to virus species in a diverse range of environments.

A recent study in PLoS ONE reports the development of a strategy to overcome such problems; Allen LZ et al (2011) - of the J. Craig Venter Institute - show, in a 'proof-of-principle' study, how they can now separate individual virus particles from a mixture and submit these single viruses to genomic analysis. The results of this paper are likely to enhance many areas of virology including ecology, immunology and basic biology which is probably why the group have patented the process. Although the paper didn't actually deal with environmental samples, a paper by the same group is currently in the works.

What Allen et al did was make themselves a well defined mixture of bacteriophage (viruses of bacteria) particles. They filtered this suspension in order to only get the viruses in their sample. These viruses were then dyed by the attachment of fluorescent molecules to their surfaces so as they could be separated using what is known as a flow cytometry machine. This machine allowed only single virus particles to pass through and were then 'printed' onto a microscope slide in a 'high-throughput' fashion. To stabilise the particles they embedded each virus in a bead of agarose - a gel-like substance; they were also able to visualise each virus found within the agarose. Once they had separated each particle out they then used a special kind of PCR to amplify the entire virus genome inside each agarose bead. The products of this were then used for DNA sequencing and finally assembled into the whole virus genome using computational methods.

The group are currently attempting to further optimise this protocol to make it easier and more accurate especially considering that this method cannot yet be easily used for RNA viruses nor viruses about which no sequence information is known. Also, the viruses amenable to this technique would have to be pretty stable to survive the whole process. You can read about their plans for this in the paper's discussion.

What does this mean for virology in general?

Virologists have generally concentrated on studying populations of viruses in their investigations; animals or cells are infected with one million infectious virus particles and the effects on host functioning are measured, for example. What this research shows is that in some cases it is entirely possible to look at the genome of individual particles and not have to rely upon mixtures of thousands, if not millions, of genetically variable viruses. The major areas of science that may benefit from this development will be those that rely on virus discovery, for example, the assessment of total virus diversity in a given environmental sample. The ability to uncover low concentrations of virus in an infectious disease context in humans may also benefit, especially if there is difficulty in growing the virus in tissue culture. Groups studying the genetic diversity of viruses can now accurately determine the exact genome sequences of individual viruses and also quantify them. This research will hence benefit a wide range of disciplines within virology in general.